Here’s my light version of  Bucatini amatriciana, a very popular Italian recipe. This recipe is based on one of the many versions of this dish. In fact in Italy cities the amatriciana sauce is prepared in different ways. This dish has evolved during the years but the most known version nowadays is made with guanciale or pancetta, a type of Italian bacon. And of course the ingredient number one of Italian cookery: tomatoes! 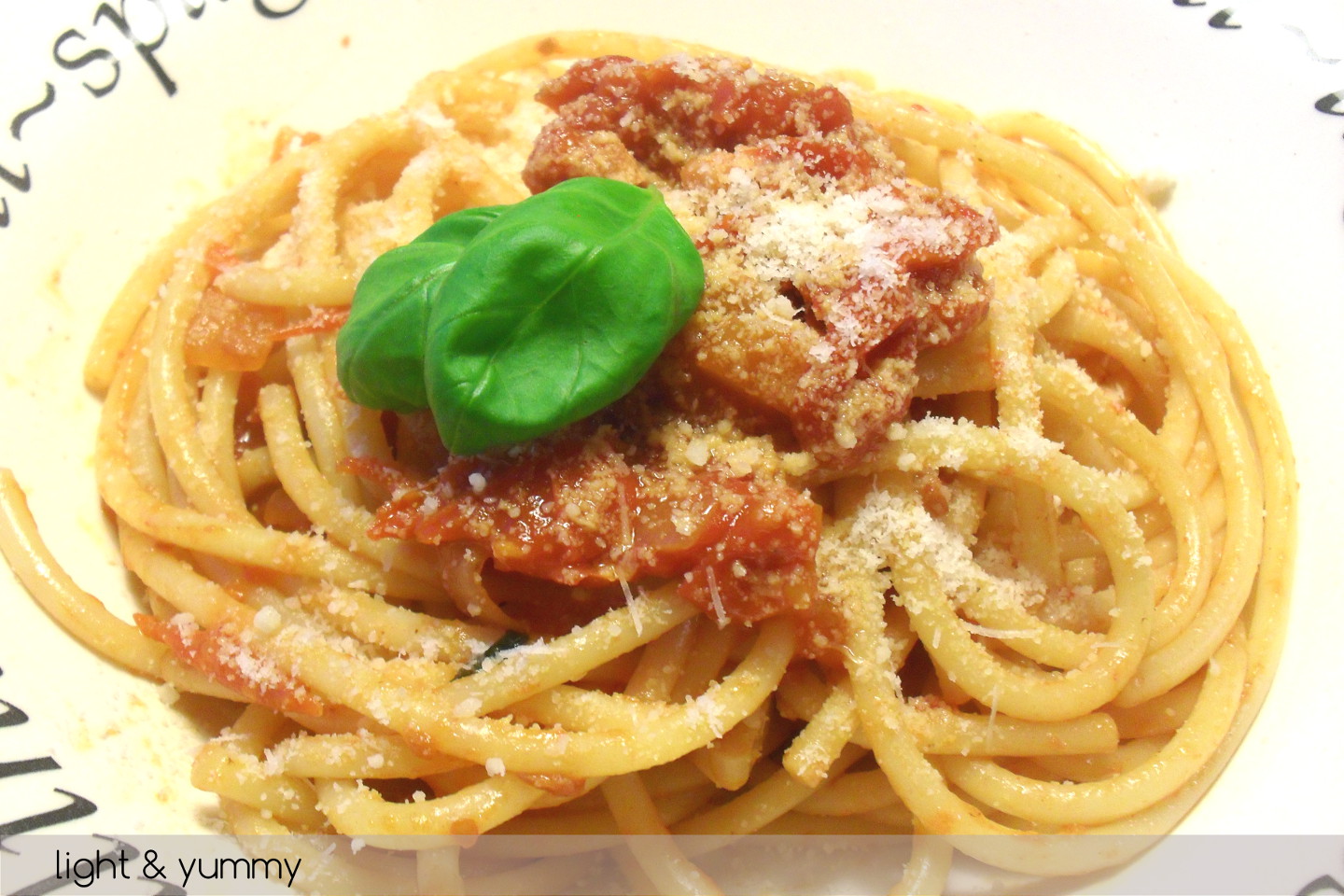 Bucatini amatriciana is very easy to make, ideal for organising a last minute pasta dinner with friends. I tried to make this recipe as simple and light as possible in order to keep all the flavour without adding too much fat. If you are on a diet you can surely eat this dish with a nice and big salad on the side without feeling guilty! 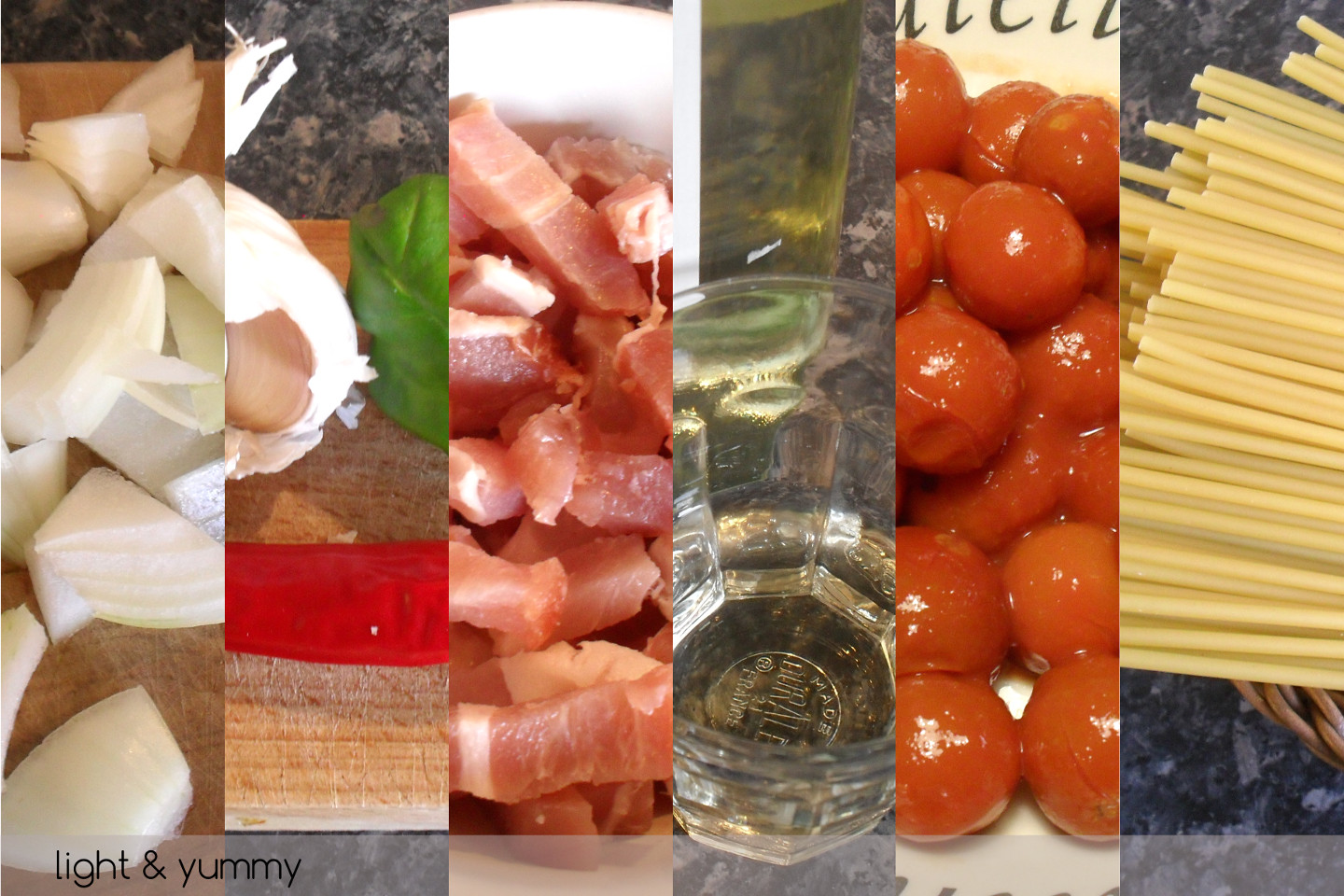 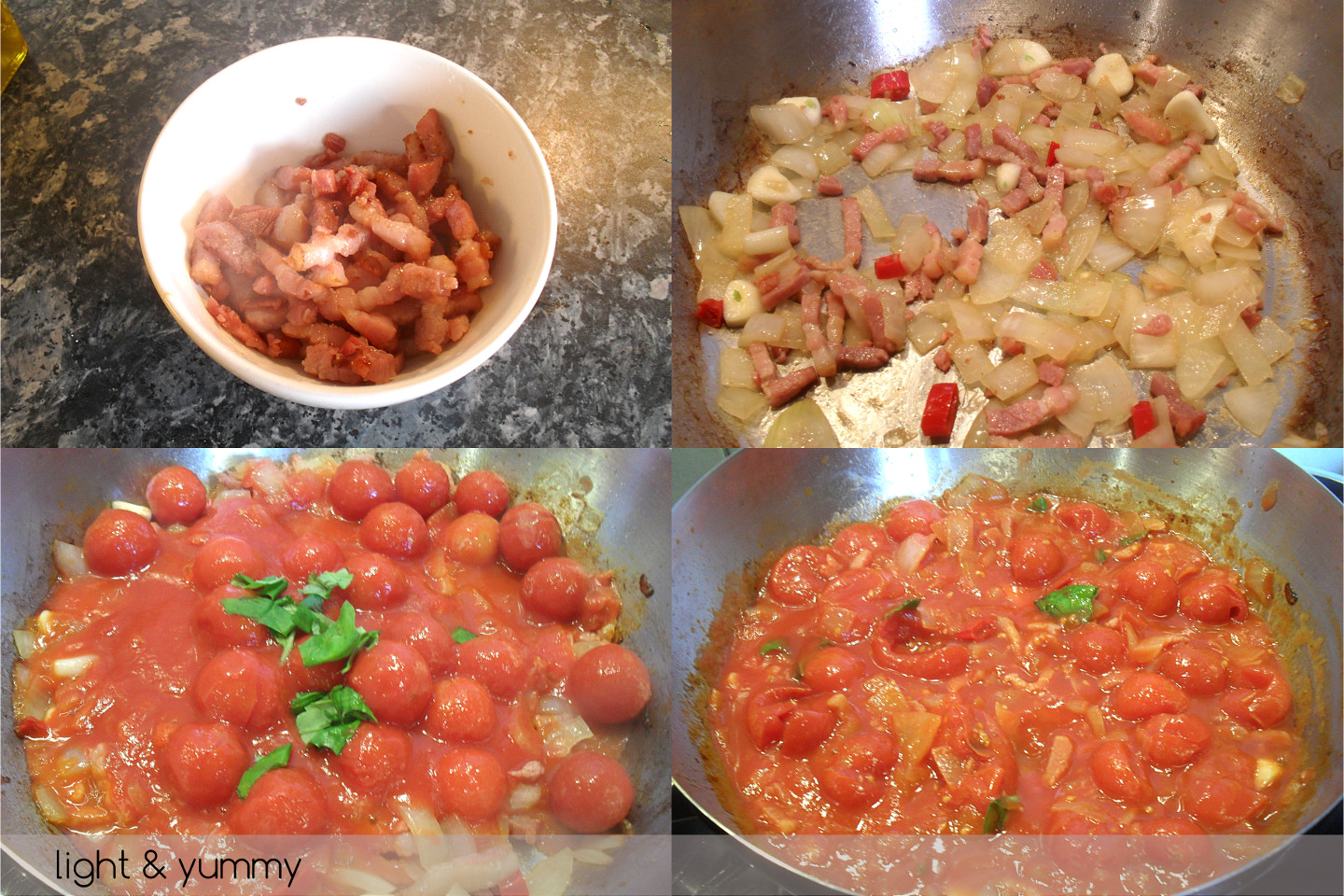 Put the bacon in a very hot non-sticky pan and let it fry in its own fat until it browns slightly. Lift the bacon in a dish while retaining the fat in the pan. In the same pan add 1 tsp of oil, the chopped onion and the chopped chilli (if used) . Stir until the onion becomes soft and add a bit of water if it gets too dry. Return the bacon to the pan and add the garlic. Stir well and let the flavours mix together for a couple of minutes. Then add the wine and let it evaporate on medium to high heat. Add the tomatoes and half of the basil. If using  canned cherry tomatoes, squash them slightly. Add salt to taste. Cover and simmer for about 15 minutes or until the water released by the tomatoes has evaporated. At this point the sauce is cooked. 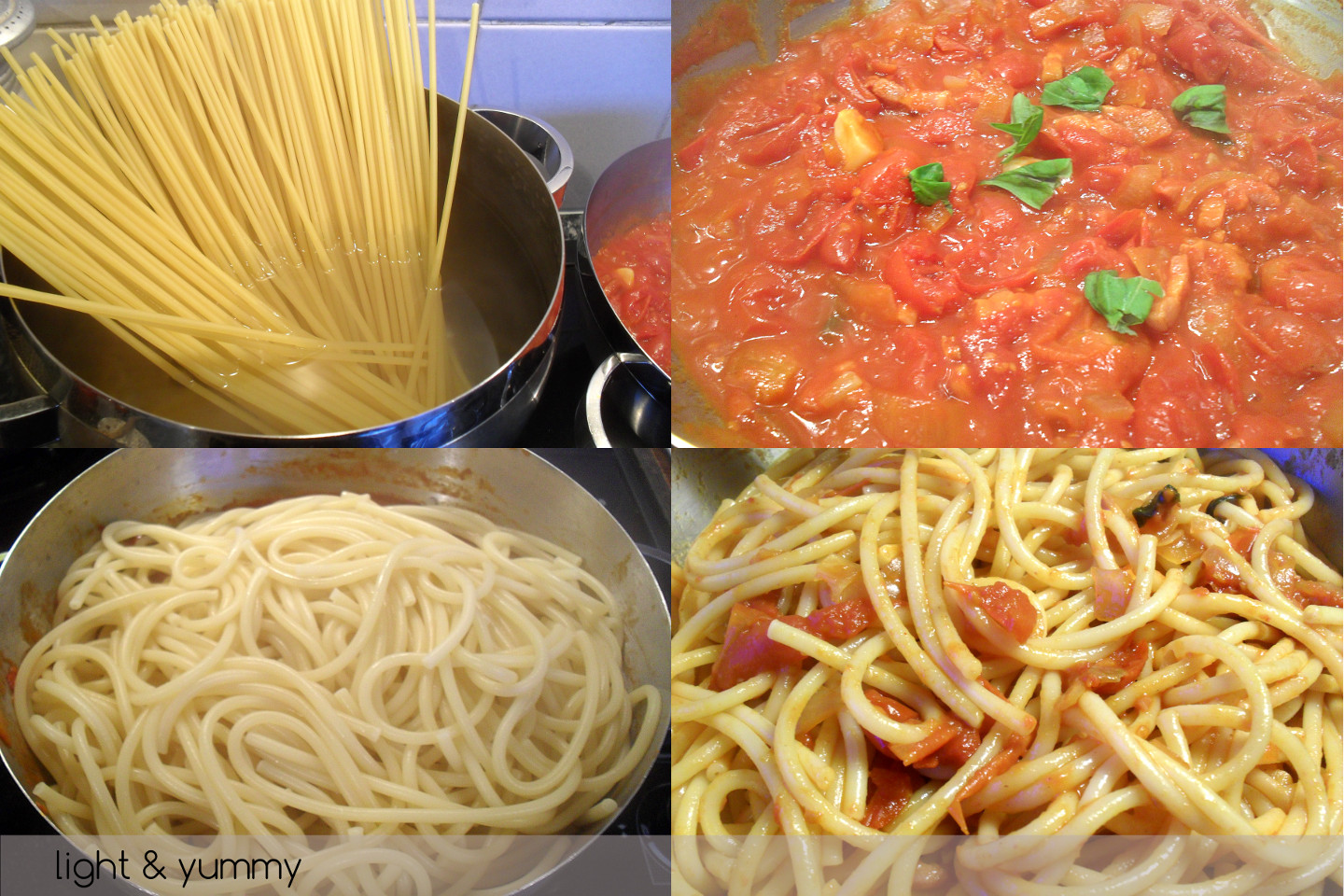 While the sauce is cooking, put bucatini pasta in a large pan full of salty boiling water. Cook the pasta for the time indicated of the packet or following your preferences. Drain the pasta very well and add to the amatriciana sauce together with the extra basil, salt and pepper to taste. Toss well. 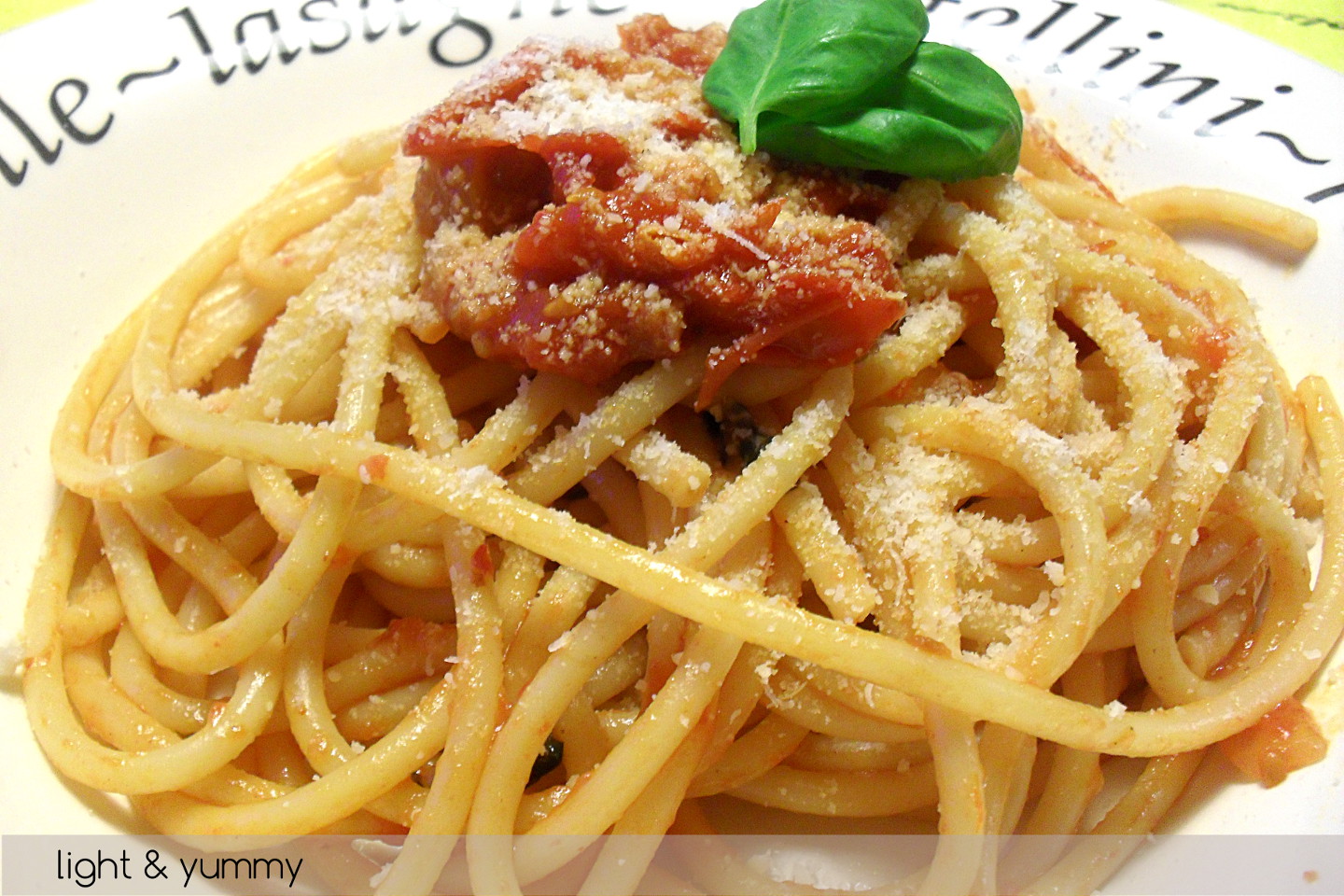 To eat a complete and nutritious meal serve a salad as a starter. Use fresh lettuce, cucumber and diced cooked ham dressed with balsamic vinegar.

If your daily points allow it serve also a low fat yoghurt with diced fresh fruit as a dessert!

This site uses Akismet to reduce spam. Learn how your comment data is processed.

Seamless Theme René, made by Altervista